Climate change is predicted to be the reason for an increase of global temperature levels, which are mostly due to very high carbon dioxide emissions caused by anthropogenic livelihood systems, mainly in industrialised countries. Nearly every country is already struggling with droughts, floods, rising sea-levels and higher power as well as higher intensity of hurricanes due to meteorological disorders as the most visible effects of climate change. However, it has its major impact on agricultural practices, and developing countries are predicted to be affected most. This circumstance may lead to further increasing differences in the development levels between developed and developing countries.

Therefore, research on climate change is gaining more and more importance  in different research institutes all over the world. As predicted that developing countries will be affected most, one could anticipate, that most research would be done in these most affected countries. But the majority of developing countries can simply not afford high expenditures at research levels. They depend mostly on the economical support from institutions like the European Commission, the International Foundation for Science, World Bank, World Health Organisation or other scientific and cultural organizations.

However, the occurrence of climate change is the subject of many studies both in countries with high and low development, whereby its distribution is not proportional. The following disquisition aims to analyse the distribution of research on climate change and agriculture according to development levels of different countries. The used data are also correlated with socio-economic indicators to create a better connection with social characters and research. Therefore, the aim of this paper is to verify the hypothesis that more research is done and scientific publications are acquired in higher developed countries on the topic of climate change and agriculture than in the low developed countries. Additionally, the paper should show if socio-economic parameters (like HDI or GDP) are correlated to the level of research on climate change in different countries.

On behalf of these data, one could see where research is done, who is doing research on climate change related with agriculture and how the first authorship is distributed world-wide (or rather where the first authors are coming from).

The results should show if these parameters are in correlation with the level of research on climate change in the context of agriculture. For the analysis, the linear regression and the Pearson correlation have been used as statistical tests.

Graph 1 below shows the first results of the analysis. To find out if developing countries have less research on issues of climate change connected with agriculture, the countries where the research has been carried out have been classified according to the Human Development Index. The result shows, that the increase in publication numbers with higher HDI classification of the countries is significant as the graph shows a nearly proportional regression line and a high coefficient of determination. Countries with an HDI value higher than 0.9 (16 countries) constitute about one third of the total number of publications found within the search terms. Countries showing an HDI value of 0.4 and below (16 countries) only represented a share of around 4 per cent of the total number of articles found. Thus, in countries with lower HDI less research is done regarding climate change and agriculture, as less publications have been carried out in comparison to countries with high HDI. 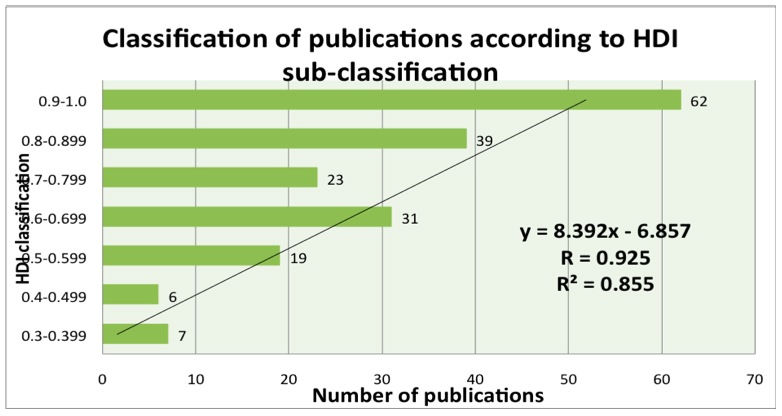 As a last step of the analysis, one tried to correlate socio-economic characteristics of the countries with the number of publications on climate change. As one example of the analysis, the correlation between the Human Development Index (UNDP 2012) is shown in the graph below. The country where the research has been done has been categorized according to the four HDI development classifications very high, high, medium and low. 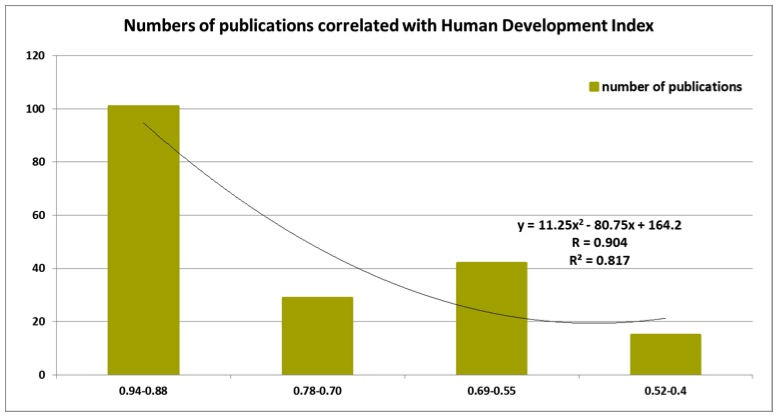 And as the graph indicates, there is a strong correlation between the number of publications and the HDI distribution of the countries, where the research has been carried out. In countries within the category of very high human development, the most research is carried out. The higher number of publications in the category of high medium development in comparison to those of high human development take the fact into account, that big developing countries like India, China or South Africa can be found in this category.

It is therefore obvious to see, that developing countries with their inherent high percentage of people in agriculture will struggle most with the predicted climatic changes. This seems pretty aggravating, as many farmers` livelihood will be in danger due to their high rate of self-supply.

But as the results of the research show, most research is done in countries with high development. Financially sound research institutions are mainly found in developed countries, and research on climate change relevant categories is concentrated there too. Most developing countries can simply not afford to lucrate capital for expensive research, no matter how important the results might be to adapt to possible climate changes.

To understand the importance of smallholder farmers in the Global South, it is important to mention that they produce the majority of the global produced food and feed stuff. And even if they will be affected most, still, negative impacts will affect the industrialised countries in a more indirect way through our dependence and our enmeshedness in the global food market. Therefore, research on climate change and agriculture in developing countries will not just help to make agricultural systems more resilient. It will play a major role in stabilizing the world food market.

Along with the first results, one found dominant first author- and co-authorship from scientists from industrialised countries, which is additionally reflecting the fact, that expenses on research in developing countries are in general small.

The results might be obvious, but the statistical evidence was surprisingly strong and made clear, that there is a strong demand on research in the context of climate change and agriculture in developing countries.

A rethinking has to take place regarding the focus of the field of research, the distribution of research funds and the integration of research institutions from the Global South. More resilient agro-ecosystems must be created in order to cope with the possible global climate changes and their impact on agricultural practices.

Violent extremist ideologies and terrorism have become a serious concern for the progress of the Southern Africa region as far as regional economic integration efforts are concerned.

Jürgen NeuhuberCo-Director, Shabka
Conflict is what makes us move forward.

Michael MayerhoferHead of Finance, Shabka
Critical thinking is a spark!

Paul WinterJournal Chief Editor, Shabka
Have you tried turning it off and on again?

Thomas KönigHead of IT & Graphics, Shabka
I am for people. I can't help it.

Corina WolfschwengerJournal Editor, Shabka
Everything must be doubted.

Lukas WankCo-Director, Shabka
Réunion must be a nice destination!

Menu
We use cookies. Some of these are necessary. Some help us to provide better user experience. AgreeDisagree
You can revoke your consent any time using the Revoke consent button.Revoke consent